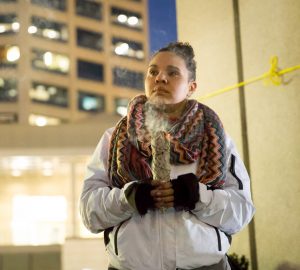 Rachel Heaton is a member of the Muckleshoot Tribe of Auburn, WA, (Duwamish descendent). She is a member and one of the indigenous leaders in the Seattle Action No DAPL Coalition and co-founder of Mazaskatalks whose strong mobilization forced the City of Seattle to divest $3 billion dollars from Wells Fargo, one of the many banks invested in the Dakota Access Pipeline. Since the beginning of the Standing Rock movement, she has travelled several times back and forth to North Dakota (between August-December) bringing her children to camp to support the efforts at Standing Rock through fund-raising efforts, holding ceremonies and providing help and support to other water protectors at camp and locally. Planting seeds of resistance from Standing Rock Camp in her community, she has made manifest the links between DAPL and local destructive projects around Seattle, empowered others to get involved in the struggle and raised her voice to show that indigenous people are devoted to making this world a better place for us and our future generations. She has also worked for her Tribe in the Department of Education for the last 19 years. 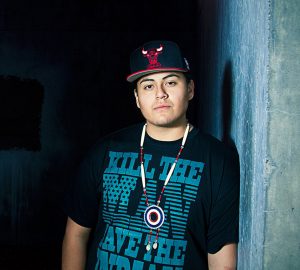 Nataanii Means, is an Oglala Sioux and Navajo activist and hip-hop artist, son of the historic American Indian activist Russell Means. He has been supporting the #NoDAPL movement at the Oceti Sakowin Camp from August until the expulsion of the camp in February. This young water protector has been on the front lines of the non-violent resistance despite the police brutality and several arrests. He is also very active in divestment actions and campaigns across the country. Native hip hop artist, he also raises awareness through his music on Native American issues and inspires/empowers indigenous youth. Just before coming to Europe he has been touring in the United States with the Voices of Water: Wake Up the World Tour and dedicated to sharing his front line narrative through performance, public speaking and divestment actions. 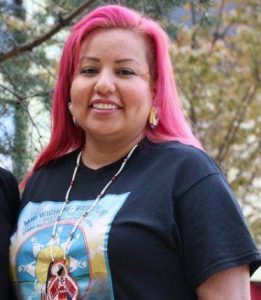 Wašté Win Young, Wichiyena Dakota and Hunkpapa Lakota from Standing Rock. She was present from August 2016 to February 2017 with her family camped at the confluence of the Cannonball and Missouri Rivers–on ancestral land her people hold title to under the Fort Laramie Treaty of 1851 and 1868. This location was the epicenter of the #NODAPL movement also known as the Očeti Šakowin Camp. She continues to be involved in divestment efforts against the Dakota Access Pipeline, the Keystone XL pipeline and other fossil fuel projects. She is the mother of 4 children and currently resides in the Long Soldier Community on Standing Rock. 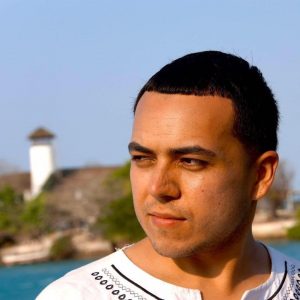 Rafael Gonzales aka. Tufawon (Dakota/Puerto Rican), With his latest project The Homecoming, Southside Minneapolis rapper and producer Tufawon returns to his local roots with a new global perspective, having realized the dream of exploring the world highlighted on his previous effort, The Send-Off. With smooth and soulful boom-bap production, Tufawon expands on the themes of politics, culture, social awareness, and self-care that has defined his approach, showcasing the growth that travel and personal development have brought to his life and his work. Rafael Gonzales put his music career on hold to fight the Dakota Access Pipeline. With a genuine connection to a team of water protectors, he found a home at the Oceti Sakowin resistance camp north of the Standing Rock reservation. For 4 months, he fought alongside his new family of warriors and comrades both on the front lines and doing bank  divestment actions. He is now touring in the United States with the Voices of Water: Wake Up the World Tour and dedicated to sharing his front line narrative through performance, public speaking and divestment actions.